Do you fear death? If so, why?
Many people fear death because of the universal fear of the unknown. We each know we’ll die one day, but don’t know how, when, or where. For many, this fear is rooted in the fact that they don’t know what will happen to them after they take their last breath.
The ultimate purpose in Christ Jesus coming to earth was to conquer death, and in doing so, remove it’s fear from anyone who will follow Him. We read that, “it is for freedom that Christ has set us free.” In Galatians 5:1, Paul instructed, Christ followers to stand firm in the freedom Christ provided and then not get tangled up in any kind of fear-bondage.
As children, from the point in time when we learned about death, some degree of fear was set in motion in the heart of each of us.
Do you remember your first encounter with death as a child? For most of us it probably involved the passing of an older relative or maybe a pet. For some of us, it was a shocking, abrupt, life-altering experience.
The writer of Hebrews speaks of Jesus crucifixion saying, “That through death He might destroy him who had the power of death, that is, the devil, and release those who through fear of death were all their lifetime subject to bondage” (Hebrews 2:14b-15).
In other words, through one’s lifetime, we’re each subject to a bondage to the fear of dying. But Jesus’ overpowering His own death destroyed the devil’s power in death and therefore has set us free from slavery to that fear.
We can rejoice in the words found in 1 Corinthians 15:54,55:   So when this corruptible shall have put on incorruption, and this mortal shall have put on immortality, then shall be brought to pass the saying that is written, Death is swallowed up in victory.  O death, where is thy sting? O grave, where is thy victory? (KJV) 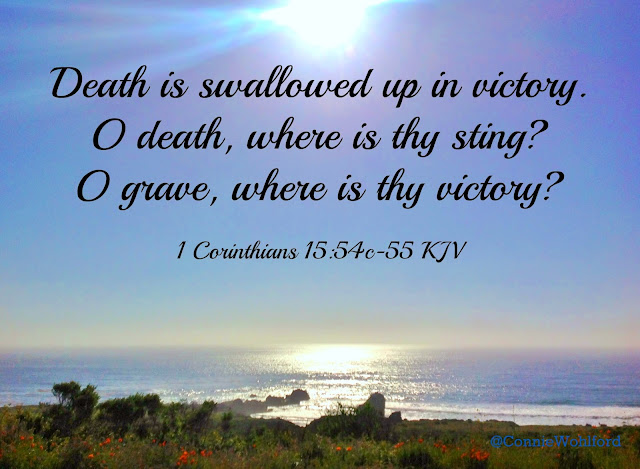 It’s because Jesus died on the cross, taking on Himself the punishment for sin we each deserved, and then, after being buried and His body lying in a grave for three days, He rose—alive again. Because Jesus is the Son of the God of the universe, He had power to overthrow death.
﻿﻿﻿﻿﻿﻿﻿ In this, He made a way for His followers to do the same. Thus, He is called the firstfruits of the resurrection of the dead (1 Corinthians 15:20).

This is why freedom in Christ is true freedom. This is why His followers need not fear anyone who can kill their mortal bodies. It’s why Christians, in places where Christianity is forbidden, have the wherewithal stand firm and refuse to renounce their faith even in the face of persecution and death. They also have the help of the indwelling Holy Spirit.
This is also why we who follow Christ need not fear death. Death has no power over us and it’s why Paul could stand firm and say, “For me, to live is Christ, and to die is gain” (Phil. 1:21 NKJV).

We glory in the cross of our Lord, for it is the catalyst for our own victory over death and the fear of it. As Resurrection Sunday (Easter) approaches, let’s rejoice in this freedom for which Christ has set us free!

Oh, Hallelujah!
He is risen, indeed!